The TMC supremo said if Aadhaar is not a proof of citizenship as per the home minister, then why was it linked to welfare schemes and the banking system.

Kolkata: West Bengal Chief Minister Mamata Banerjee on Wednesday lashed out at Union Home Minister Amit Shah over the new citizenship law, which she said has left the country burning, and asked him to douse the fire.

“When Babri Masjid was demolished there was some tension but after that the people were living in peace. But this has been disrupted ever since they came to power again. Look what they did to Kashmir, look what they did to Assam and Tripura. The entire country is burning. Your job is to douse the fire,” she said urging the Home Minister to ensure peace in the country. 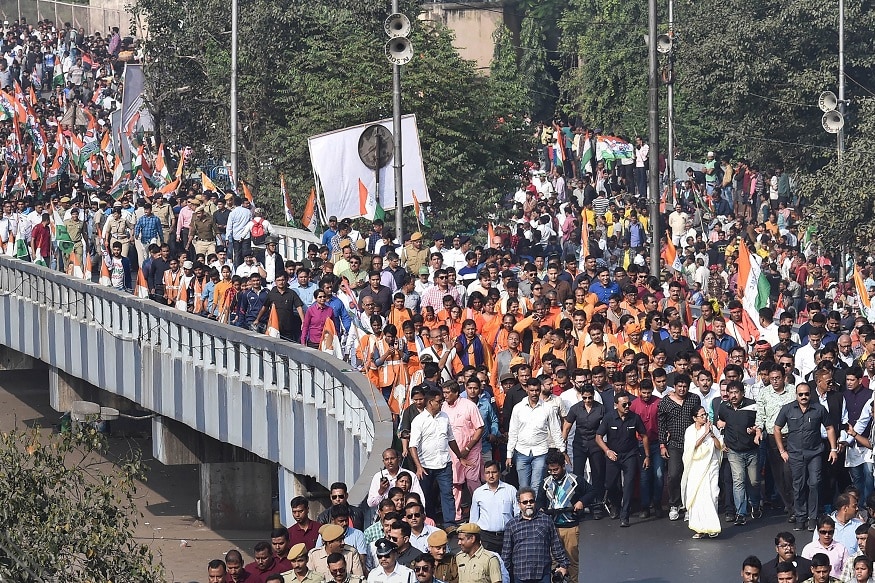 Mamata Banerjee leads the protest rally of her party workers against the NRC and the CAA, in Kolkata. (Image: PTI)

She once again reiterated that the Citizenship Amendment Act (CAA) and National Register of Citizenship (NRC) will not be implemented in Bengal. “Don’t fall in their NRC trap. It’s a lollipop. It’s two sides of the same coin. He (Amit Shah) is saying no one will lose his or her citizenship but on the other side he is saying PAN, Aadhar cards will not work in the case of CAA and NRC. Then what will work? I would like to urge the citizens not fall in their trap,” she said.

“If Aaadhar will not work then why have they spent so much of money on it. Don’t underestimate me ‘bhaiyya’ (brother). NRC and CAA are not going to be implemented in Bengal. They claimed that they believe in ‘sabka saath, sabka vikas’ (development for all) but actually they are doing ‘Sabka Sarvanash’ (everyone’s destruction). I would like to tell the Centre to withdraw the CAA and NRC immediately, or else I will see how they implement it here,” she said.

The TMC will on Thursday organise a meeting at Rani Rash Moni Road and another mega rally on December 20 at Park Circus area against the legislation.

Recently, the Chief Minister had stayed orders on work related to the National Population Register (NPR) across the state. The official circular, issued by the additional secretary of Home and Hill Affairs Department read, “I am directed to inform you that all activities regarding the preparation and updation of the National Population Register (NPR) are hereby stayed in West Bengal. No activity regarding NPR may be taken up without prior clearance from the state government. The order has been issued in the interest of public order”.