Alabama’s defense has epitomized the “next man up” philosophy this season, and will need to do it again in next week’s Citrus Bowl.

The Tide lost both of its starting inside linebackers, Dylan Moses and Joshua McMillon, to torn ACLs before the season began. Starting defensive end LaBryan Ray suffered what became a season-ending injury in the third game of the season and starting nose tackle DJ Dale is expected to miss Alabama’s bowl game with a bothersome knee injury from mid-November.

Alabama will meet Michigan next Wednesday without two of its most experienced defensive players. NFL-bound cornerback Trevon Diggs and outside linebacker Terrell Lewis both decided not to participate in the non-College Football Playoff postseason game.

In their place, sophomore Josh Jobe is expected to make his second start of the season at cornerback, while redshirt sophomore Christopher Allen is slated to make his first-ever start at outside linebacker.

“They see this as an opportunity to play and they want to try to create some value for themselves and their future,” coach Nick Saban said Friday of his less experienced players entering the lineup. “For the guys that get experience, I think that’s invaluable.” 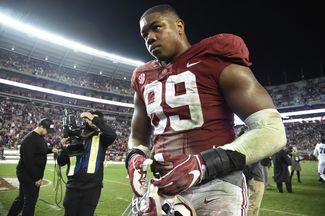 Allen has appeared in all 12 games this season after missing all of last season because of a knee injury. Allen has eight tackles, a half-sack and two quarterback hurries coming off the bench.

“Chris has done a nice job in practice,” Saban said Friday. “He’s certainly taking the opportunity seriously and really working at trying to do the things that he needs to do to play well in the game. I’ve been really pleased with what he’s done so far in this bowl practice.

“I think this is a good opportunity for him. It’ll be interesting to see how well he goes out there and plays. But we think he’s capable and we have a lot of confidence in him. We’re looking forward to him taking advantage of this opportunity.”

Allen also played a rotational role for the Tide as a freshman in 2017, appearing in seven games and making six tackles. He will be among the team’s most experienced players next season at a position that will undergo significant overhaul this offseason, with Lewis and redshirt senior Anfernee Jennings heading to the NFL.

“He’s just stepping up,” Jennings said Friday of Allen. “He’s done what Coach has asked him to do. He knows how important it is to prepare the right way and he’s been doing it.”

Jobe started the season opener against Duke before coming off the bench the rest of the season, battling a mid-season injury that left his hand in a cast at one point.

“This is a good opportunity for him,” Saban said Friday. “He’s had a good attitude about what he’s done in practice and how he’s tried to improve.”

Jobe has made 22 tackles while contributing mostly on special teams.

“When you give Josh an opportunity, he always makes a big-time play,” starting cornerback Patrick Surtain said last week. “When he’s on the field, he’s a very dynamic player.”

The former four-star recruit will be in the mix to start at cornerback next season after the departure of Diggs, and could use the Citrus Bowl to prepare for that role.

“He’s handling it well,” Surtain said. “He’s brought a lot of fire to the defense when he’s on the field. It’s not new to him, he’s been out there before. I expect nothing less than great from him.”