Today, Sara Ali Khan, Janhvi Kapor and ‘Malaal’ star Sharmin Segal went out and about in the city today. The star kids were clicked by the paparazzi in the gymwears.

Sara looked pretty in a black printed crop-top and red shorts with a jacket tied around her waist while Janhvi looked stunning in her white shorts and shiny silver jacket. Sharmin, on the other hand, looked simply beautiful in her white top and blue pants.

Check out the picture here: 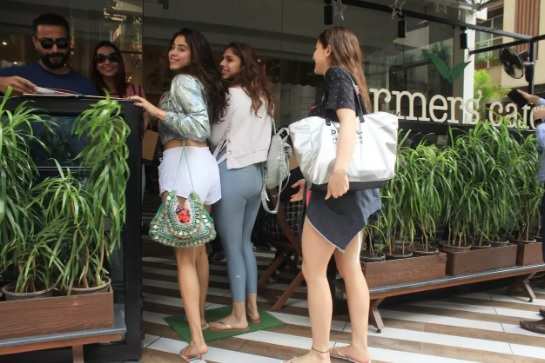 Whole world is all set to celebrate the New Year tomorrow and Bollywood celebs have already left for their favourite holiday destinations ring in the same with their loved ones. Recently, Kareena Kapoor Khan and family left for Switzerland for the New Year celebrations. Also, Varun Dhawan jetted off with his lady love Natasha Dalal and they bumped into Kapoor sisters at their vacays. Now, Varun-Natasha bumped into Anushka Sharma and Virat Kohli in the picturesque location. The ‘Zero’ actress shared picture of all four of them posing for the camera.

and Nick Jonas have been giving us major goals for a long time now. As per the latest photos, shared by PeeCee, they have now jetted off to a beachside location to ring in New Year’s eve. In this photo, we can see the actress and her hubby sitting next to each other as they posed by the sea. She captioned the post, ”Life as it should be. 🌊 ❤️📸 @divya_jyoti”.

Unlike other celebs who opted for snow-capped mountains for their New Year vacay, Taapsee picked a beachside destination. In the first picture, we can see the star posing with her sister on the beach. She wrote, ”Not a destination but a journey…. #Sisterhood #TravelBums #TapcTravels #Puchi #Mauritius”. Taapsee looked pretty in a red blouse with a matching skirt.

To welcome the year 2020, many Bollywood celebs took off to their favourite holiday destinations. Actress

is also enjoying her holidays in London with filmmaker

Vani took to her Instagram to share a group picture and a snap with KJo. The caption of the post read, “About last night” and for another pic with KJo she captioned, “It’s not blurry.. your focus needs adjusting 😛 #inbestcompany”

Ranbir Kapoor and Alia Bhatt have been rocking the headlines for their relationship. Speculations about their impending marriage have been doing rounds the internet. And Neetu Kapoor’s recent visit to Alia Bhatt’s Juhu residence along with Ranbir fuelled the rumours. A few days back, Alia and Ranbir were seen attending Kareena Kapoor Khan’s X’mas bash and walked in hand-in-hand after posing for the paparazzi.

At the promotional event of her upcoming film ‘Chhapaak’, Deepika Padukone praised the trailer of

Talking about the trailer, she reportedly said that she watches a lot of trailers for films with her cast and when she gets time, she watches these films as an audience. She added that the trailer of ‘Panga’ impressed her a lot. According to her, the trailer has been painted by Kangana’s performance, and she feels it would be a good film.