The Indian market had a volatile week marred by US-Iran conflict but managed to touch new highs on Friday after the tension simmered.

Experts suggest that the volatility will only increase as we move closer to the Union Budget scheduled for February 1. October-December quarterly earnings will also play a major factor, they said.

“Markets are heading for testing times given that the result season has set in and budget parlays too will have to be digested in weeks to come. Volatility is expected to increase, although prices are not expected to move much till Budget. However, sector-specific rallies are likely to continue,” Jimeet Modi, Founder and CEO, SAMCO Securities & StockNote told Moneycontrol.

US and China are expected to sign a partial trade deal on January 15. China’s Vice Premier Liu He, head of the country’s negotiation team in the US-China trade talks, is visiting the US on January 13-15 to sign a ‘phase one’ trade deal.

Experts feel it would be major relief for global equity markets and the economy, which has been facing trade concerns for more than 16 months now.

On the macro data front, CPI inflation for December will be announced on Monday, January 13, which is likely to increase further (from more than three-year high of 5.54 percent in November 2019) on an increase in food prices.

“In the short-term, the market will be careful given the limited room for growth due to premium valuation and minuscule improvement in business, while the Budget and Q3 results will give clear cut direction for the market. The global risk has reduced in 2020 with a likely trade deal between US-China, Brexit and in anticipation of improvement in the world economy,” said Vinod Nair, Head of Research at Geojit Financial Services.

We have collated 15 data points to help you spot profitable trades:

Maximum Put open interest of 44.25 lakh contracts was seen at 12,000 strike price, which will act as crucial support in the January series.

This is followed by 12,200 strike price, which holds 23.56 lakh contracts in open interest. 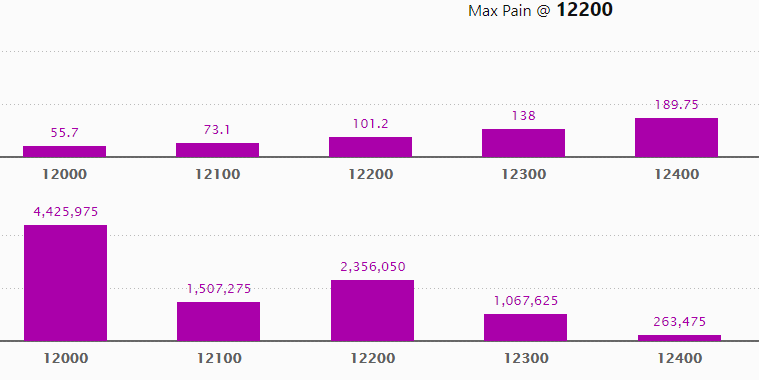 Stocks with a high delivery percentage

A high delivery percentage suggests that investors are showing interest in these stocks.

Based on open interest (OI) future percentage, here are the top 10 stocks in which long buildup was seen.

Based on open interest (OI) future percentage, here are the top 10 stocks in which long unwinding was seen.

An increase in open interest, along with a decrease in price, mostly indicates a build-up of short positions. Based on open interest (OI) future percentage, here are the top 10 stocks in which short build-up was seen.

A decrease in open interest, along with an increase in price, mostly indicates a short covering. Here are the top 10 stocks that witnessed short-covering on January 10.

Upcoming analyst or board meetings/briefings

TCS: To consider and approve the financial results for the period ended December 31, 2019, and dividend.

KRBL: To consider and approve the financial results for the period ended December 31, 2019.

Lotus Eye Hospital: Board of Directors meeting to appoint the chief financial officer of the company and to consider any other matters with the permission of the chair.

Delta Corp: To consider and approve the financial results for the quarter and nine months ended December 31, 2019, and to consider Interim Dividend.

Wipro: To consider and approve the financial results for the period ended December 31, 2019.

Bandhan Bank: To consider and approve the financial results for the quarter ended December 31, 2019.

Stocks in the news

Infosys Q3: Profit grew 10.9 percent and 2 percent on the revenue front in the quarter ended December 2019. Dollar revenue, as well as constant currency growth for the quarter, stood at 1 percent each compared to the same period last year, which matched analyst estimates.

Union Bank: Bank will cut the marginal cost of funds based lending rate (MCLR) by 0.10 percentage points across tenors from Saturday. The bank has reduced the MCLR by 10 basis points across all tenors with effect from January 11, 2020, Union Bank of India said in a release.

IL&FS: Request being made to MCA for probe into a suspicious transaction 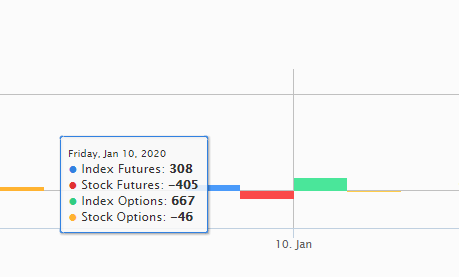 Stock under F&O ban on NSE

Yes BankGet access to India’s fastest growing financial subscriptions service Moneycontrol Pro for as little as Rs 599 for first year. Use the code “GETPRO”. Moneycontrol Pro offers you all the information you need for wealth creation including actionable investment ideas, independent research and insights & analysis For more information, check out the Moneycontrol website or mobile app.